Beware of Red Caps, they are Red Alert for UP : says PM 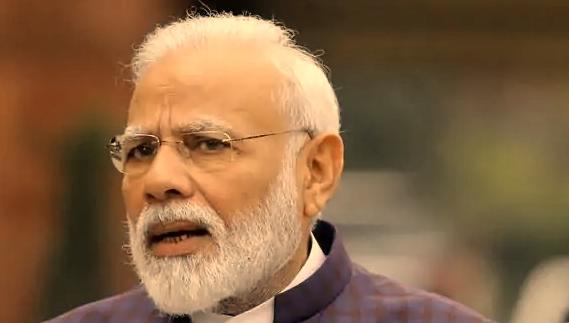 Beware of Red Caps, they are Red Alert for UP : says PM

Gorakhpur, Dec 7 (UNI) Prime Minister Narendra Modi on Tuesday hit out at the Samajwadi Party by terming it as " red Caps' who are just lust to get Red beacons and have nothing to do with the problem of Uttar Pradesh or its people.

He warned the people to be aware of these forces and should be red alert against them.

Without taking any names, the PM said," Today the entire UP knows that the 'red caps' were only interested in 'red beacons' alone. They had nothing to do with your pain and issues. The 'red caps' want power - for scams and for filling their coffers, for illegal encroachments, for providing freedom to mafia." He further attacked the SP saying," The 'red caps' want to form govrnment in UP to show leniency towards terrorists, to bring them out of jails. So always remember that the 'red caps' are red alert for UP - they are bells to danger."

Mr Modi was addressing a big public rally at the new Fertilizer factory ground which was inaugurated by him along with the Gorakhpur AIIMS and a ICMR Regional research Centre here on Tuesday.

The PM said everybody knew the importance of Gorakhpur fertilizer plant for farmers and employment here. "But previous governments showed no interest in starting it, which has been closed since 1990. Everyone knew that AIIMS Gorakhpur has been a long pending demand but the governments before 2017 made excuses in allotting land for it.

During his 35 minutes speech , Mr Modi said work is going on across the country to build 16 new AIIMS in the last 7 years. Our goal is to have at least one medical college in every district of the country.

Talking about the achievements of his government , the PM said ," Today our government has opened government godowns for the poor and Yogi ji is busy delivering food to every household. About 15 crore people of UP are getting its benefit and PM Garib Kalyan Anna Yojana has been extended beyond Holi".

" I had come here 5 years ago to lay the foundation stone of AIIMS and fertilizer factory and it was a big privilege for me to inaugurate both the projects together today," he said.

He also said that the new building of the Regional Medical Research Center of ICMR was also inaugurated today.

Talking about the new initiative to benefit the farmers he said the government stopped misuse of urea by producing 100% neem coating urea.. provided soil health cards of the farmers so that they can know what kind of fertilizer is needed for their farm and thirdly laid emphasis on increasing the production of urea by reopening closed fertilizer plants:

He disclosed that during the Corona period , when the rate of fertilizers went up due to stoppage of imports, the Centre had to provide over Rs 78,000 crores as subsidy to provide cheap fertilizers to the farmers of the country.

Mr Modi said now UP cane farmers would get a good price for their yield as before 2014, just 20 lakh liters of ethanol were produced in UP but now it has gone up by five times to over 100 crore litres annually.

UP CM welcomed PM and thanked him for the support by the Centre to complete the projects on time.

He said earlier the samples of encephalitis patients in Gorakhpur was sent to Pune and by the time it was confirmed, the patient either died or was paralyzed. Today, we inaugurated the regional viral research center in Gorakhpur to test corona, encephalitis and other diseases.