Coconut: The fruit of Nature 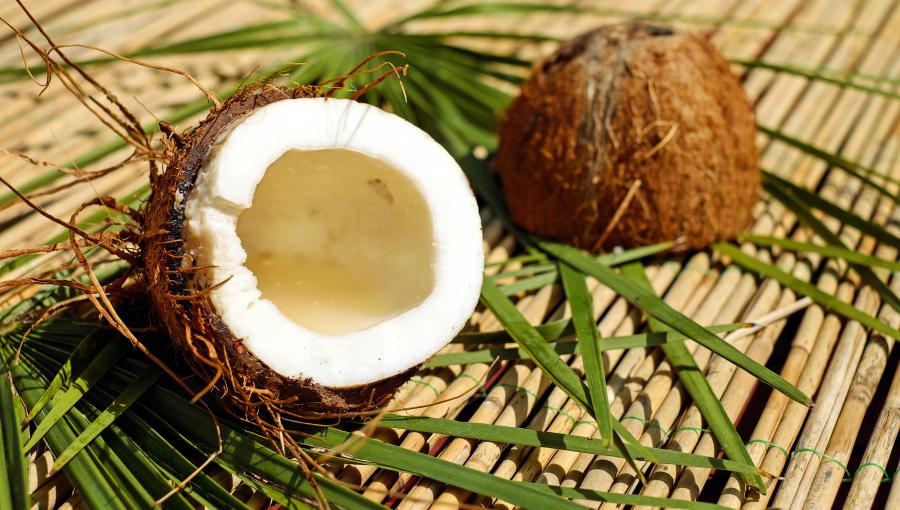 We all are familiar with this fruit. Coconut or copra is being used in auspicious works since time immemorial. Coconut water or coconut kernel is used for health whereas, coconut oil for eating. It is believed that the English name of coconut was given by a Portuguese sailor in the 16th century. When he saw the three eyes of the coconut, he named it coco because it resembled the face of a human. In Portuguese, coco means smiling face. Later nut was added to it. By the way, the highest number of coconuts in the world are found in the Philippines; Indonesia is at second and India at third. Tamil Nadu, Kerala, Karnataka, Andhra Pradesh are the largest producers of coconut in our country.


There are three stages of coconut:
1. Raw or watery coconut: This is the initial stage of coconut. It is green in color and people drink its water. This is called the tender coconut or Daab. After 9 months of pollination, the coconut water is ready. Many times it has light creamy kernel in addition to water. It is very beneficial.

3. Dried coconut or copra: It is also called Gola. This is the third stage of coconut. It does not contain water. It is mainly used to extract oil. It is also used to enhance taste in sweets etc. It is very high in fat, so it should be consumed in moderation. Here we are informing you more about the benefits of Coconut.


·        Coconut has been in use for hundreds of years, especially in South India. It increases good cholesterol. Also, it has zero cholesterol.

·        Coconut oil is mostly used for cooking in South India. However, in the recent past, the use of coconut oil has increased throughout the country for certain bakery items. Nevertheless, in North India, coconut oil is used more for scalp application and massage.

·        The lauric acid present in it helps in increasing the immunity and good cholesterol of the body.

·        Medium chain triglyceride (MCT) of coconut oil can be helpful in reducing epileptic seizures in children.

·        In some studies, it has also been found beneficial in Alzheimer’s (old age amnesia).

·        The fatty acids present in it prevent hunger. In such a situation it is good for those wanting to lose weight.

·        It is a better source of energy. It goes directly into the liver and can be used immediately to get energy.

·        It is beneficial in skin problem. Also used in some cosmetic products.

There are mainly two types of coconut oil found in the market:
Virgin coconut oil: It is also known as cold compressed oil. It is very pure oil. It is not heated while preparing. It contains a good amount of anti-oxidants, vitamins and minerals, especially lauric acid and vitamin E. It does not contain trans fatty acids, but the problem is that its shelf life is short (about 18 months) i.e. it does not last long.

Refined coconut oil: Like the rest of the refined oils, it also undergoes the process of refining, bleaching and adding preservatives. Dirt is separated in refining. Then bleaching is done to lighten the color and finally de-odouring to eliminate the natural smell of oil. In this process, oil is heated and chemicals are also added. This reduces the good qualities of coconut oil. It is not considered very beneficial for health.

Coconut water
The trend of coconut water has increased significantly in recent times. It is considered one of the most natural and best drinks.

Benefits
- This is a pure drink, with no adulteration.
- The electrolytes present in it (potassium, magnesium etc.) are in the same proportion as those in our body. Coconut water is more beneficial than lemon-sugar solution in de-hydration or diarrhea etc.
- Potassium and magnesium present in it are good for blood circulation.
- It is anti-microbial which helps in reducing weight, removing pimples and increasing immunity.
- It kills the worms present in the stomach.
- Drinking coconut water after exercising or working hard is very beneficial. This compensates for the salts released from the sweat.
- It has natural sweetness, so diabetic patients can also consume.
- It is beneficial to drink when you feel tired because it is a good source of energy.

- It is easily digested and can therefore be given to young children.
- Keeps the body cool. Giving coconut water to the patient is very beneficial if heat stroke occurs.
- It can also be helpful in eliminating kidney stone.
- Anti-oxidants present in it reduce the effect of increasing age.

Benefits
- It contains a good amount of fiber, vitamins and minerals.
- It is natural anti-bacterial.
- It is beneficial in digestive disorders because the fiber is very high.
- Feeding mothers need immediate energy hence; it is very beneficial for them.
- Also good for growing children.