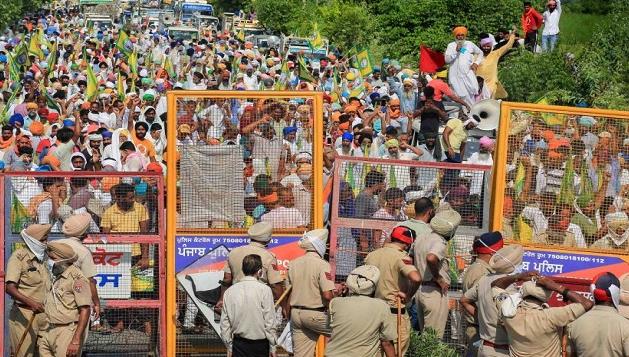 Heavy security arrangements have been put in place at the National Capital's boundaries especially with Haryana at the Singhu border in view of the 'Delhi Chalo' call by the farmers.

A large number of force personnel equipped with gears have been deployed and drone surveillance was being carried out to monitor the movement of vehicles towards the capital.

Similar arrangements are also in place at the Delhi-Faridabad border, border on Rohtak road to check the entry of farmers.

Checking at the borders and security arrangements affected the traffic flow and resulting in traffic snarls.

On Wednesday, Delhi Traffic Police had advised motorists to avoid Delhi's borders in view of the farmer rally march called by the All India Kisan Sangharsh Co-ordination Committee.

Checking was underway at all the borders of Delhi , resulting in traffic snarls.

In a tweet police had said ' Traffic Advisory : All motorists are hereby advised to avoid Delhi Borders in view of the Rally/March/Protest called by All India Kisan Sangharsh Co-ordination Committee on 26 & 27/11/2020 against the Central Government ‘s Farm Laws.'

Meanwhile, farmers who were headed to Delhi from Punjab were stopped Punjab -Haryana bordr at Shambu , Patiala, wherein they attempted to break through the barricades and were further dispersed by the police with the use of water cannons when they continued to move forward despite warnings.

As per reports, many farmers from Haryana assembled near Karnal, who also tried to march towards Delhi.