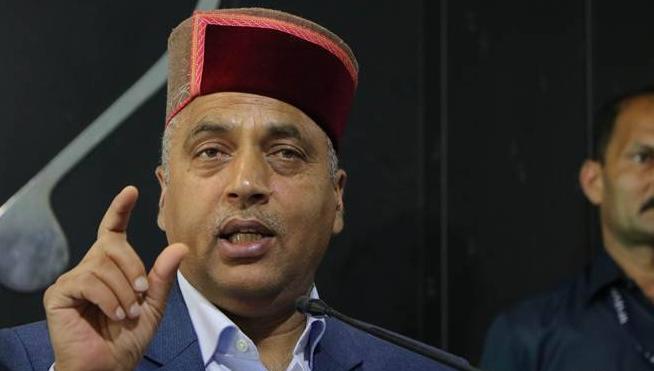 While addressing his first meeting at Tarkwari village of the district after recovering from CORONA virus, he said the opposition leaders were doing DIRTY politics even during this crisis.

He said that they made a hue and cry that the State Government was doing nothing to bring back lakhs of Himachali's stranded in different parts of the country.

Now when the Government has brought home about 2.50 lakh people of the State from various parts of the country, the same Congress leaders were alleging that the State Government has threatened the lives of lakhs of Himachalis by bringing back these people, he added.

Thakur said that the Corona pandemic had forced us to completely change our life style. He said that use of face mask and maintaining social distancing has become vital to check spread of this virus.

He said that all possible precautions must be taken to check spread of the pandemic. He said that even today use of mask and maintaining proper social distancing was only remedy to save ourselves for this virus.

Chief Minister said that there were no dearth of funds with the state government for the development and that was an indication to the fact that all such projects the foundation stones of those were laid on December 22,2018 have been completed and were dedicated to the people.

He said that it was also a great occasion for the people of the Bhoranj area that foundation stones of nine projects were laid today and in all projects worth eighty one crore rupees were dedicated to the people . He was addressing the public meeting at Kanjyan village.

Thakur said that it was also creditable for the people of the Bhoranj area that they had a woman MLA (Kamlesh Kumari) who was always after the government for sanctioning of funds for various projects. Mahinder Singh Thakur, Jal Shakti minister, Rajinder Garg, Civil supplies minister and two local MLA’s Naridner Thakur (Hamirpur) and Kamlesh Kumari (Bhoranj) were also present in the function.

He said that since Hamirpur was known as the hub of the political activities and that was why it had seen all round developments on all fronts.

Jai Ram Thakur said that it was due to the strong and able leadership of Prime Minister Narendra Modi that the dream of crores of Indians had been realized, with Bhumi Pujan of Lord Ram Temple at Ayodhya performed by the Prime Minister and magnificent Lord Ram Temple would be constructed within two-three years.

He said that today the country was producing over 4.50 lakh PPE kits per day and exporting it to several other countries. Earlier such kits were imported from other countries.

Chief Minister said that it was a matter of pride that Himachal Pradesh had become the first smoke Free State of the country as about 2.80 lakh free gas connections have been provided to the needy households.

Local MLA Kamlesh Kumari while welcoming the Chief Minister said the people of Bhoranj area were fortunate that Chief Minister Jai Ram Thakur has always remained considerate towards developmental needs of people of the area.