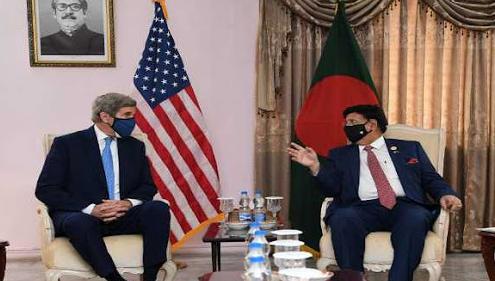 commitments to the Paris Agreement during his meeting with the US Special Presidential Envoy for Climate John Kerry.

During the meeting, the Bangladeshi Foreign Minister recalled United States’ crucial role in the adoption of the Paris Accord and appreciated Biden administration's decision to return to the global climate negotiations.

He also noted the crucial contribution of Mr. Kerry for concluding the Paris Accord in 2015, and mentioned that Bangladesh had closely worked with the US delegation at that time.

He expressed hope that under the leadership of the U.S., the developed countries would come forward with ambitious actions to limit global warming to 1.5 degree Celsius by the end of this century.

John Kerry and Momen had a substantive exchange of views on possible areas of Bangladesh-US climate collaboration in mitigation and adoption of renewable energy through technology transfer, capacity building and climate finance.

He further added that Bangladesh was reviewing the potential to enhance its mitigation ambition to submit a quantified ambitious NDC (Nationally Determined Contribution) by June 2021. Bangladesh submitted an interim NDC on 31 December 2020.

John Kerry appreciated Bangladesh’s excellent adaptation and mitigation efforts. He said that Bangladesh had shown amazing resilience to climate change despite many adversities. He also praised Prime Minister Sheikh Hasina for her leadership in the Climate Vulnerable Forum (CVF).

While discussing about the upcoming COP26 in Glasgow in November this year, Foreign Minister Momen reiterated the significance of the promised international financial flow at and beyond US$100 billion annually to support sustainable development and energy transformations of the developing economies, and he stressed that the funding should be distributed at 50:50 ratio between mitigation and adaptation.

He also mentioned at the same time that adaptation without mitigation is not a good strategy. On the issue of the national determined contribution (NDC), Foreign Minister Momen emphasized on behalf of Bangladesh as well as on behalf of the CVF that all countries need to work hard to fulfill their NDCs at the earliest. He also requested for high level presence from the U.S. government at the CVF-COP26 event, planned to be held on the sidelines of the COP26 to secure a recovery package for the climate vulnerable countries.

Dr. Momen said that Bangladesh has emerged as a global leader in climate change adaptation which was possible for systematic investment in the adaption measures. He further raised the issue of “loss and damage” due to climatic events, including displacement of people from river erosion, sea level rise and increasing of salinity in the coastal areas.