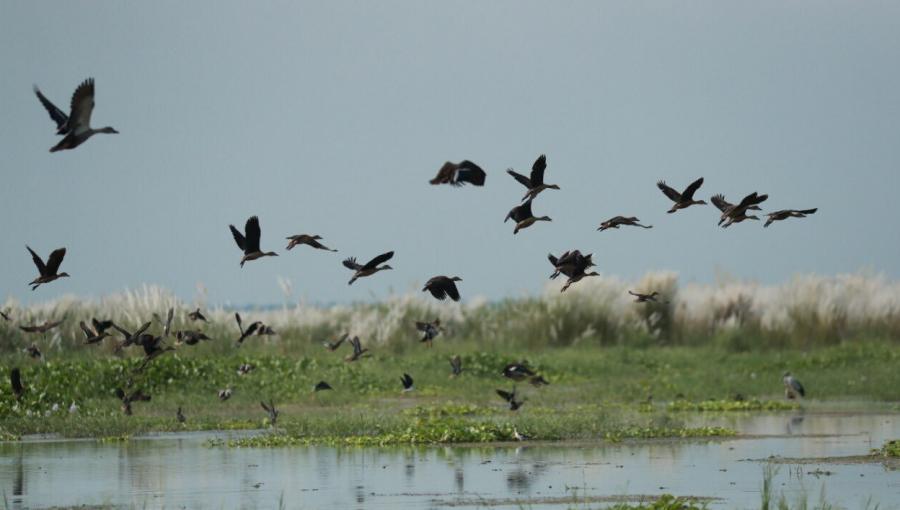 The shadow of the only Haiderpur Nambhoomi site of Saharanpur division in Uttar Pradesh is visible on these days. Immediately after the arrival of winter season, migratory birds have started arriving at this wetland. Local birds have also camped on the Hyderpur Nambhoomi and the lake.

About a year and a half ago, with the efforts of former commissioner of Saharanpur Sanjay Kumar and recently retired forest conservator of forest department VK Jain, the site was established on a very big land near the Bijnor Ganga Barrage under the name of Hyderpur Wetland where Thousands and millions of local and migratory birds carry out their activities and also participate in breeding activities. An effort was made by Sanjay Kumar to make this site completely friendly and safe for birds.

The site was visited by T. Uma, Joint Secretary in the Central Government. He stared at thousands of beautiful birds tweeting there for a long time. He said that Hyderpur Wetland Ramsar site deserves to be declared and it is suitable for inclusion in the world-class wetlands.

He told reporters that the central government will make serious efforts in this direction. Suraj, an official of the forest department, said that the Hyderpur Nambhoomi site is very favorable for wildlife, birds and birds. The Forest Department fully supervises the site. The administration has strictly prohibited entry of poachers and anti-social elements there. Central Joint Secretary T. Uma and Forest Department official Suraj said that the presence of dalphin present in the Ganges at the Hyderpur Nambhoomi site shows that the Ganges water at this place is pure and clean. The specialty of dalphin is that it is found only in pure and clean water.

Birds of species such as gray leg goose, surkhab, common cell duck etc. are encamped there in large numbers on this wetland. Union Joint Secretary T. Uma, who is an IFS of Kerala cadre, has praised the efforts of IS officer Sanjay Kumar and former Conservator of Forests VK Jain for developing Haiderpur Wetland.